The Newport Ladies Book Club
ATHENA
by Heather B. Moore

Chapter 1
“Three! Four! Five! Six!” my class chanted in unison, but it sounded more like we were all just grunting.
I smiled and delivered a sharp jab into the plastic dummy in front of me, even though sweat poured off me like the overflowing banks of the Santa Ana River. The kickboxing instructor took my smile as a sign to increase her intensity. I stifled a groan and forced myself to keep moving. Three months of this class, and I finally felt like I could keep up. Who said that Athena Di Jasper couldn’t rise to the challenge?
The workout slowed, and we started the cool-down. My favorite part. The sense of accomplishment zinged through me. I felt strong, relaxed, and in control. The perfect end to a productive day. I’d even skillfully avoided my mother’s advice about men earlier when she’d called me on the way to the gym. Most single men my age were either divorced with a couple of whiney latchkey kids or had some complicated issues that prevented them from maintaining a decent relationship or were gay. Around Newport Beach, the margin of normalcy for men in my age bracket had shrunk in the last few years. It only took me until my thirtieth birthday to realize that. Two years ago.
Wiping my face with the club towel, I made my way to the locker room, waving good-bye to a few of the women. I hesitated at my locker, debating whether it was more disgusting to take a shower in the commune stall or to drive home in my sweat-drenched clothes. Out of habit, I reached for my cell phone in my gym bag while trying to decide.
Three texts.
Everyone knew the best way to get my response was to text. Well, everyone but my mother. She insisted on calling—every day. My dad remained silent for the most part, in his own world of fading memories.
Text 1: Put it on your calendar
Put what on my calendar?
I scrolled to the third text and read in the order they were sent—all from Karl: In town, can I see you tonight?
Text 2: 8:30? I’ll pick you up.
Now Put it on your calendar made better sense. Karl liked to tease me about my inability to make one move without scheduling it on my calendar. Speaking of calendars, I switched to my phone calendar and saw two things—first, it was 8:05 p.m., and second, I had nothing scheduled that made a good excuse not to see my boyfriend. Yes, he was my boyfriend but not in the traditional sense of “we date three to six months then move to the next level.”
He was just a guy I had dinner with when he came into town.
And my mother hated him.
“He’s the only man you’ve dated for the past year. Are you or are you not going to get married?” A question Mother often asked when she used up her other interfering questions.
Karl is a nice guy. Okay. He’s quite good-looking, charming in that rugged, younger-version-of-Clint-Eastwood way, and could probably date a lot more interesting and romantic women—but for some reason, he liked me. Probably because I’m safe. I don’t make demands. I leave him at the doorstep with nothing more than a kiss good night—a very chaste kiss, by the way. Surprisingly, he hasn’t complained, or else I’d have reduced our twelve months of dating to a week. I remain mysterious. I’m low-maintenance. I don’t complain when he’s gone for weeks at a time on assignment. I don’t mind if he forgets to call (which hasn’t happened yet). And . . . I pay him.
He’s one of my photographers for the online magazine I launched ten years ago during my last semester at UCLA. A senior project that took off—or backfired, depending on how one looks at it—Newport Travel has brought in a steady income since then, even if it hasn’t exploded into the vision I had for it when I started. At least my mother approves of the income.
What she doesn’t approve of is a man who travels around the country snapping photos then comes back home for a few days and dates her daughter.
“You need someone who will settle down, be a family man, and hold down a job that lets him afford a place of his own. Maybe you should date a Greek.”
Karl, who lived in a beachside apartment with three other men, didn’t rank high on my mother’s list of potential husband material. At least he didn’t live with his parents like my last boyfriend, who was Greek (and dating him only lasted about eight days). But I couldn’t always choose Greek, even though I was technically one myself, so I tried to keep my options open as much as possible.
Although that was getting harder and harder at the age of thirty-two.
So with no other option and half dreading another night at home alone, I texted back. 8:45? 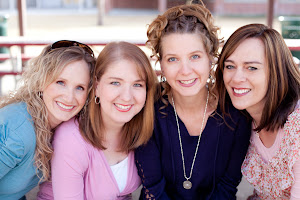 The Newport Ladies Book Club series is unique in that each Newport book is written from the point of view of a different woman in the book club. The first 4 books cover the same time period and the same book club meetings. But only with reading all 4 books, will you learn the whole story of each of the women and her full character journey. The 2nd set of 4 books covers the next 4 book club meetings. Think of it as a parallel series, not as a forward-moving series.

The final and 9th book, Tying the Knot, is a thank-you to all of our readers who have asked "What happens next?"

Please note that the first 8 books can be read in any order, but Tying the Knot wraps up all of the stories in a single volume. 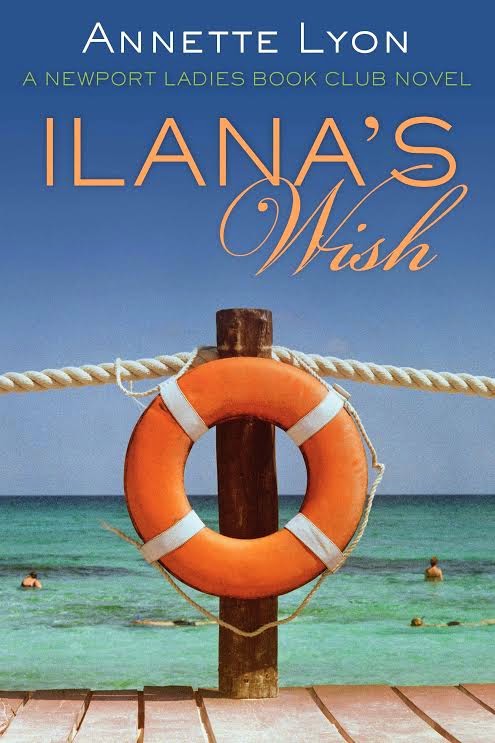 Ilana Goldstein leads an enviable life: a thriving career and a happy marriage to a handsome doctor. All that’s missing is a baby . . . Then, in an instant, her life falls apart. Now, beneath Ilana’s once flawless exterior hides a dark secret. Following a rapid succession of crushing trials, Ilana turns to prescription medications to take the edge off her agony—both the ache of her body and the anguish of her soul. But when her desperation to dull the pain leads to the downward spiral of addiction, her friends in the Newport Ladies Book Club must do whatever it takes to save one of their own. 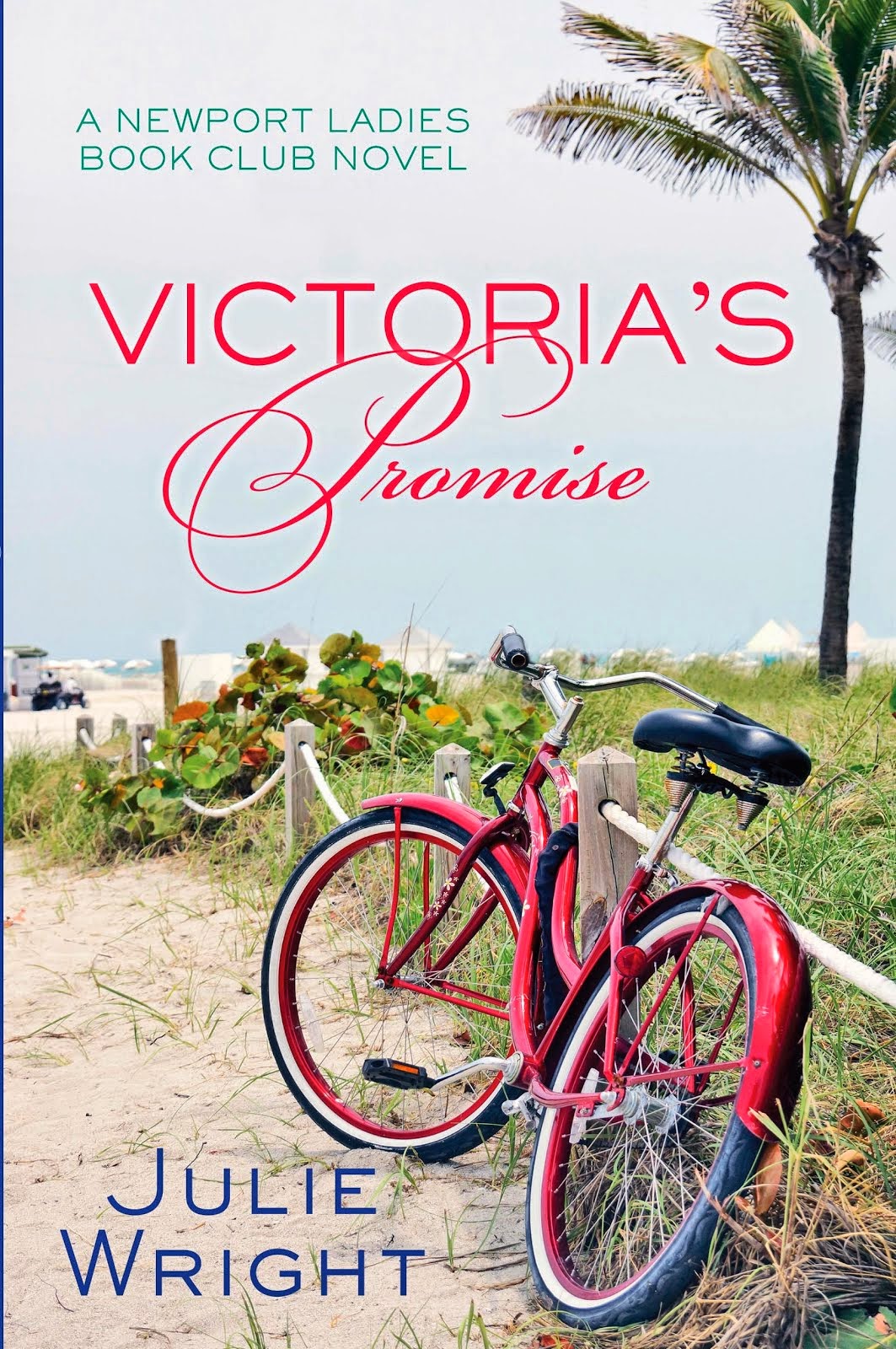 A luxurious mansion. Thirty stunning bachelorettes. One very eligible bachelor. Behind the scenes, Tori Winters is set to pull the romantic strings as assistant director of Vows. But Christopher Caine, a consummate Southern gentleman and the star of Vows, seems almost too good to be true—and soon, even Tori finds herself falling under his spell. With the support of her friends in the Newport Ladies Book Club, Tori must make a life-altering decision: is she willing to jeopardize all she’s worked for in order to embrace her own fairy-tale ending?

RUBY'S SECRET by Heather B. Moore 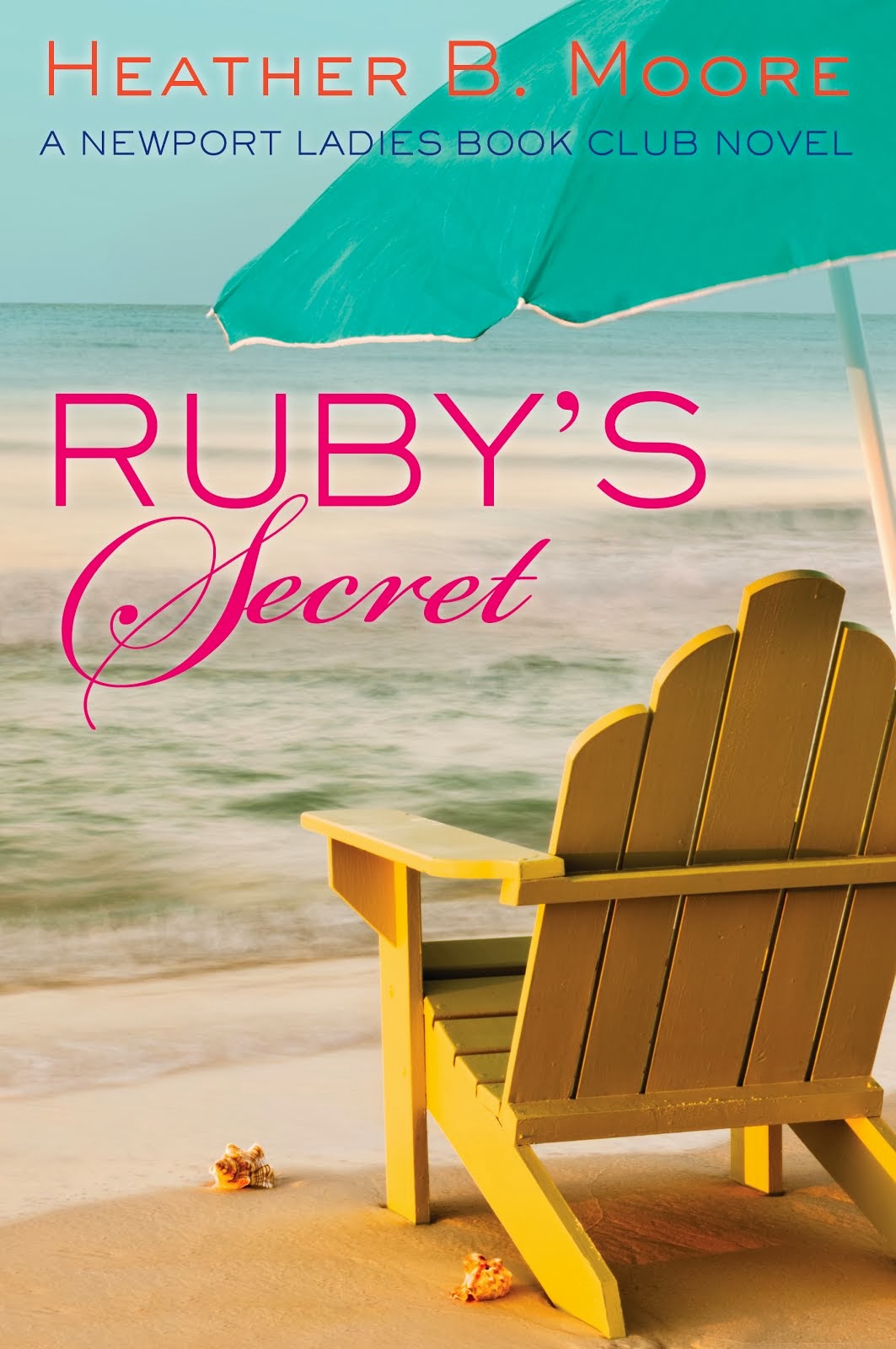 At age sixty-two, life is finally beginning for newly widowed Ruby Crenshaw. After long years spent in the role of loyal wife to her charming but unfaithful husband, she’s ready to live the life she’s always dreamed of. Her resolve is firm: she’ll never make the mistake of giving her heart to another man. When Ruby jets off on a much-needed Greece adventure with her friends from the Senior Center, she isn’t prepared to meet Gabriel—the group’s tour guide—a native Greek and a true gentleman. But no matter their growing attraction, Ruby is not about to fall for charming again! 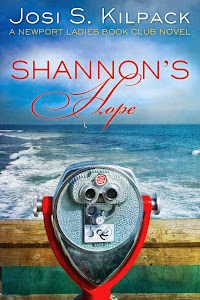 When Shannon’s step-daughter moves in following another failed stint in rehab, Shannon puts everything she has into helping Keisha any way she can. Her attempts to help soon turn into covering up Keisha's failures, and Shannon finds herself risking everything good in her life. Through the love and guidance of her Aunt Ruby, and growing connections to some of the women at book club, Shannon begins to identify the missing pieces of her own life that she's tried to fill the wrong way. 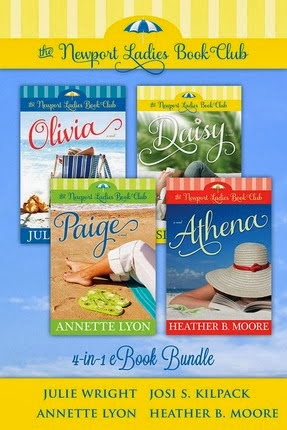 First set of the series available as a book bundle at DeseretBook.com!

ATHENA by Heather B. Moore 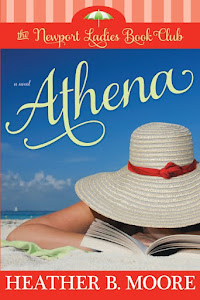 Athena is a self-proclaimed bachelorette—it’s better that way—no one gets hurt. But when tragedy strikes, Athena realizes friendship and love is the only way she can pull through, and she must, for the first time in her life, risk opening her heart. 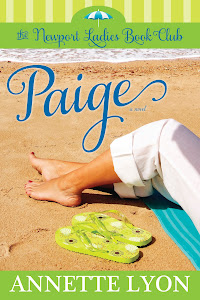 Young, divorced, with two children, Paige must come to terms with her husband’s betrayal, discover who she is as a woman rather than a wife, help her boys adjust to life in a broken home, and decide if love and trust will ever be a part of her future again. 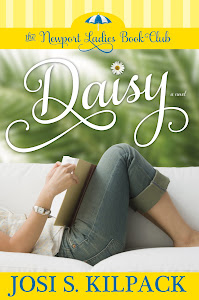 Since becoming a mother at the age of 17, Daisy has looked forward to the day when she could check "motherhood" off her list of things to do. At the age of 46 everything seems to be right on track, until she suddenly finds herself facing a very different future than she planned on, and an uncomfortable evaluation of the past she thought she understood. 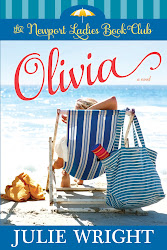 Olivia has it all--and does it all--from motherhood, to being the perfect wife, to volunteering at the hospital. But when her marriage is threatened, Olivia must decide if she has the strength, or desire, to save it.

Starting the book club and meeting new ladies is the perfect anecdote for Ruby in order to live her new, single, and determinedly carefree lifestyle. She pushes aside the years of a painful and wasted marriage and looks forward to the future. When she becomes involved at the local Senior Center, she finds herself on a group tour to Greece, led by the charming Gabriel. But Ruby is not about to fall for charming again.

When Ilana needs a hysterectomy, her dream of having children is shattered for good. To add to the insult, Ilana is laid off from her job due to an injury on the heels of the hysterectomy surgery, and she can't seem to find any pain relief. Medication and physical therapy are never enough, which turns into a frightening prescription drug addiction. Through friendship and feeling support from the book club ladies as she goes through recovery, Ilana becomes stronger, and happier, than she ever thought possible.

Victoria’s job is to make sure things run smoothly with the cast and crew on the reality wedding show, Vows, and that prime time television ratings soar. Oh yeah, and she needs to make sure that the surprise wedding that happens at the end of the show between the bachelor and his chosen lady love goes off without a hitch. The only problem is, the longer Tori works on the show, the more she falls in love with Christopher—the bachelor himself. Through her friendships made with the ladies in book club, Tori discovers what risks she is willing to take.

Promote Your Page Too

What books are the Newport Ladies Book Club reading?

2. My Name is Asher Lev by Chaim Potok

4. The Help by Kathryn Stockett

6. The War of Art: Winning the Inner Creative Battle by Steven Pressfield

7. Zen and the Art of Motorcycle Maintenance by Robert M. Pirsig

Other books by Julie Wright

Other books by Josi S. Kilpack

Other books by Annette Lyon 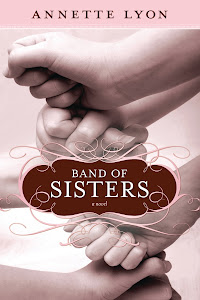 Other books by Heather B. Moore 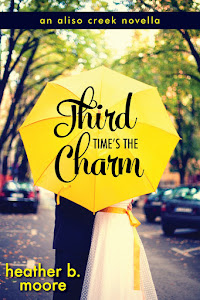 At the launch party for ATHENA 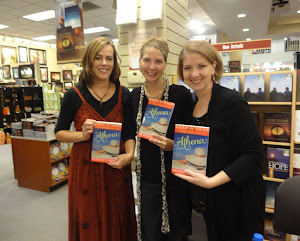 At the launch party for PAIGE 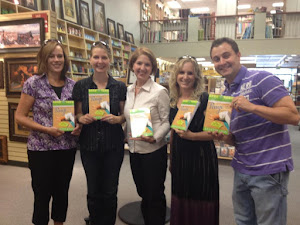 At the launch party for DAISY 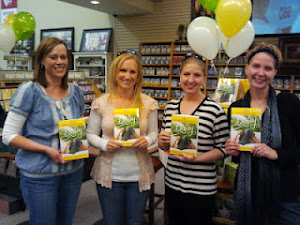 At the launch party for OLIVIA 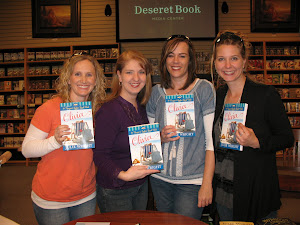